Religion must bring people together, not divide them, such was the conclusion of a debate organized by the Forum of the World’s Religions – Slovakia and the Open Society Foundation in Bratislava on 30 May 2016. Against the background of growing tensions between Muslims and majority populations across Europe, Jews, Christians and Muslims came together in Bratislava to raise their voice against the abuse of religion for political or economic gain. They also strongly condemned all forms of religiously motivated violence, radicalism and extremism.

Is it really so difficult to overcome fear and shake hands? Mr Shai Hermesh, Chairman of the World Jewish Congress – Israel, conceded he was involved in conflict against the Muslims of neighboring countries all his life. And today… he is sitting next to an official representative of Egypt, Ambassador Amr El Henawy: he would not have expected this to happen in his lifetime. Mr Ján Figeľ, the European Union’s new envoy for religious freedom in the world, underlined that even today, in the third millennium, it is not common for people to live in dignity, in harmony, free of being persecuted, imprisoned or killed for their religion just because it differs from the majority. Dialogue is today’s key concept. For Mr Figeľ, conversations such as these should continue and be widely opened to audiences including the young generation. 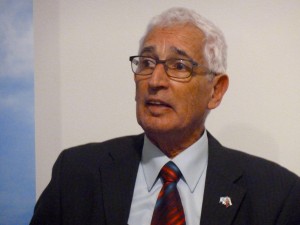 Showing great respect and personal integrity as a secular representative of Islam, Mr El Henawy conceded his ambassadorial prerogative to the invited spiritual representative of Islam, Dr Hashim A. Mahrougi, Director of the Vienna Islamic Centre, which is the oldest mosque in the Austrian capital. Dr Mahrougi highlighted the fact that most people, especially the young, consume the Internet and social networks and form their opinions based on distorted information rather than studying Islam under authoritative supervision. The result is a common generalization that Muslims are aggressors, terrorists and killers, perhaps waiting to occupy Europe and enslave the Christians. 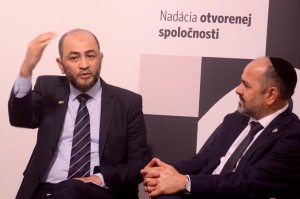 In fact, the prevailing majority of Muslims, just like the majority of Christians, are peaceful, humble, deeply religious people. Supporting the words of Ya’akov Margi, Member of Knesset, the ambassador of Egypt made the argument that Islam and Judaism are in fact very close. Both religions consider their prophets, 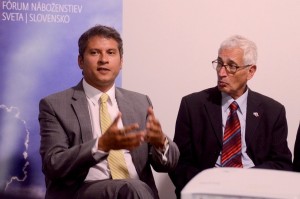 Moses or Mohammad, to be of human birth rather than being God or the Son of the Lord. Both religions refuse to depict God in painting or sculpture. And many more similarities exist. Rev Daniel Pastirčák, a preacher of the free evangelical church Cirkev bratská (Church of the Brethren), drew attention to the unique relationship between man and God, which is encouraged by all three monotheistic religions. However, there is also an immense energy in that encouragement that can be exploited. The abuse occurs when people remain convinced of the absoluteness and exclusivity of their truth. This is what has fuelled wars over centuries. 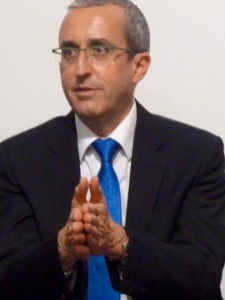 Mr Zvi Vapni, the Ambassador of Israel to Slovakia, pointed out that Israel has respected all monotheistic religions living side by side and performing their rites in harmony. The Israeli-Arab conflict is not religious, but national, he asserted. Paraphrasing Tolkien, Mr Vapni said that none of us have chosen to be born in times of crisis, but now that the world is in crisis, we must deal with it. The world is reshaping as we speak, and it is happening in a very painful way. We are forced to change. People are very tempted by quick solutions: we see these quick solutions, simple answers, blame games and extremism all around us. Mr Vapni refused to call this era a return to religious wars: the challenge was to commit to the principle, “If you save one life, you save the whole world.”

Much of the discussion revolved around the question of how to solve today’s problem of intolerance, and put emphasis on the education of children and the youth. Panelists agreed that true awareness must be fostered in schools about what is actually professed by Muslims, Christians and Jews, what connects them and what divides them. The absolute condition to underpin education is mutual respect. 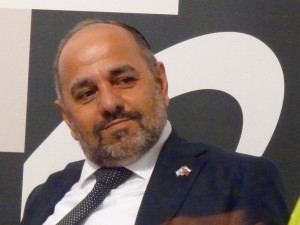 All participants agreed that Islam, Judaism and Christianity have much more commonalities than differences: built on identical ethical principles, the religions bring a message of peace and love for the neighbor. They lay emphasis on human dignity: every person has the same rights, we are all equal before God and before secular institutions. All panelists refused any forced conversion to another faith: it is necessary that social and family traditions, including religious identity, are respected.

The real dividing line, Mr Vapni pointed out, now runs between those who recognize human dignity and those who subordinate human dignity to honor, nation or religion – this is unacceptable. In the face of fundamentalism and extremism, all three monotheistic religions have a shared responsibility for the survival and prosperity of the human family. 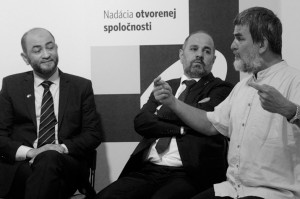 The debate made a strong appeal to bold political leadership, for faith in the future rather than obsession with the past. There is a hidden motive behind anti-Muslim rhetoric, reducing them to terrorists. Why does anyone need to scare and intimidate the citizens? A particular responsibility lies with the media to prevent that fear and anger spread like wildfire.

Everyone in the audience was pleasantly surprised to see a video message by Pope Francis screened during the debate, in which the Holy Father, supported by the voices of the representatives of Judaism, Buddhism, Islam and Hinduism, clearly calls for interreligious dialogue: „In this crowd, in this range of religions, there is only one certainty for all – we are all children of God.“ And all of us, as God’s children, are united by love. 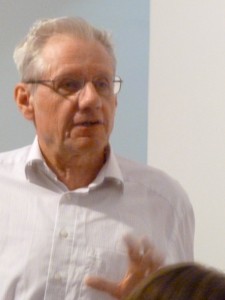 Slovakia’s former  Ambassador to the Vatican, Mr Jozef Dravecký recalled that Pope John Paul II organized a World Day of Prayer for Peace in Assisi in 1986, attended by 160 representatives of world religions. At the 25th anniversary of this event, Pope Benedict XVI led a Day of Reflection, Dialogue and Prayer for Peace and Justice in the world, reuniting representatives of world religions as Pilgrims of Truth and Peace.

The discussion ended with a series of inspirational statements discussing what can be done within the next 24 hours to make the world begin to change for the better. During the summer festival Pohoda, Rev Daniel Pastirčák will organize an ecumenical meeting for all, especially for the young visitors, during the morning of 10 July in Trenčín, Slovakia. Dr Mahrougi invited everyone to visit the Vienna Mosque to learn the true, moderate Islam at firsthand. The ambassadors of Egypt and Israel pledged to continue their public activities in support of tolerance and respect, building bridges between people. Mr Hermesh will spend every effort to ensure that the politicians separate politics from religion.

„One human family“, the vision of the famous Austrian psychiatrist Viktor Frankl, resonated in some of us at this point. As Frankl notes in his books, it took several centuries for a great part of humanity to unite on monotheism, that God is One. Now the effort must continue for humanity to achieve monantropism – that we are one human family. By the way, nothing new under the sun. This statement is already known in the ancient Vedic culture in the mantra „Vasudeva Kutumbakam“ – one world and one human family. 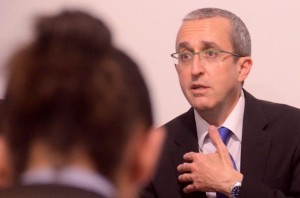 The discussion was convened by the non-governmental organizations Forum of the World’s Religions – Slovakia and the Open Society Foundation, in cooperation with the World Jewish Congress, International Christian Embassy Jerusalem and the Ministry of Foreign and European Affairs of the Slovak Republic.

Many thanks to all those who contributed to the fact that right here in Central Europe, voices are starting to resonate in public who prefer love over hate, courage over fear, and the perception of religion as a positive force that builds bridges and heals wounds. These are voices that discern true religion from its political manipulation: the world needs them to raise more and louder than ever before.