In this timely interview, Bulgarian Orthodox priest and prominent interfaith leader Petar Gramatikov recalls the oppression of religion during Communism, singles out migration as a key challenge, warns against secularization and anti-clericalism but praises the togetherness of religions on this challenge, and criticizes the position of the Bulgarian Orthodox Church on the Pan-Orthodox Council.

Could you please tell us something about yourself: who and what inspired you to become a religious leader, what were the formative moments in your life and what keeps you motivated these days?

Frankly speaking, it all began in the 1980’s as a sort of dissident reaction to the totalitarian moral grammar and to the atheistic state indoctrination and ideology. Most formative in my life were certain people – firstly, the extraordinary international leaders who changed the world for the better, president Ronald Reagan and pope John-Paul II; secondly, a Western-Orthodox (of the Uniate Church in my native city of Plovdiv) archimandrite Velik, who did not fear the authorities and gave the first catechetical lessons to schoolchildren. This opened the door of the Christ’s Church for me as well.

Very important for my personal involvement in ecumenical spirituality and interfaith movement were my post-graduate specializations and studies at Hebrew University in Jerusalem, at the Swiss Ecumenical Institute Bossey of the World Council of Churches, and at the Orthodox Theological Institute of the Ecumenical Patriarchate – Chambesy/Geneva, which is a joint-venture program with the Protestant Theological Faculty of Geneva University and the Catholic Theological Faculty of Fribourg University.

What book would you recommend to every practitioner of interreligious dialogue?

I would like to recommend a small pocket-size book on the personality and deeds of a great contemporary leader of the Ecumenical Orthodoxy, His All Holiness Bartholomew, Archbishop of Constantinople, New Rome and Ecumenical Patriarch, who had a great impact on theory and practice of interreligious dialogue. He is my inspiration as an Orthodox clergyman and theologian. This is the bilingual, Greek-English, edition: Chryssavgis Fr. John, Konstantinos Delikostantis, The Patriarch of Solidarity, 2nd ed., Istanbul, Dec. 2014, 179 p. 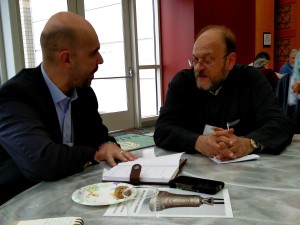 What role did religion play during Communism in your country?

Religion in communist Bulgaria was reduced by the totalitarian authorities to a kind of folklore and cultural tradition. The Orthodox faith developed into a sort of neo-pagan practice. There is a popular saying from those times that our faithful flock became religious practitioners “on four wheels” – the first time they entered the church was for baptism, the second time for marriage and the third time for their burial and final departure from this world. It is a valid depiction also for the believers of the second largest traditional religion in Bulgaria, Islam. On the other hand, during this period of both open and hidden, both physical and psychological persecution of religion, all true believers of different ethnic and religious backgrounds were united in their suffering and struggle for human rights and religious freedom. Interfaith dialogue was natural and sincere, because in this combat for civil and religious liberties everybody – all Christian denominations, Muslim and Judaic believers – were on the same side together.

Unfortunately, during the Soviet-dominated era, no religious body protested the invasions of Hungary, Czechoslovakia or Afghanistan, nor was there ever any public protest by religious leaders against actions taken to persecute believers. Bishops and their counterparts in other religions often praised the state for its attitude toward believers. This being said, a number of courageous individuals spoke out at the cost of arrest and imprisonment.

Religious associations had only the most limited possibilities for publishing. On the rare occasions when the Bible was published, the number of printed copies was  pitifully small. Neither were religious associations permitted to import religious books from abroad. Bibles, Korans and prayer books brought to the country by visitors were confiscated at the border during grueling. Only a few institutions of religious education were permitted.

I like this question of yours very much. Using capitalization for Annus Mirabilis points directly to the title of the poem written by John Dryden published in 1667. It commemorated the London „year of miracles“, 1665–1666, a series of tragedies that included the Great Fire of London, the Great Plague of London and some decisive battles. For Central and Eastern Europe, the year 1989 was the time of our Redemption. It was the „year of miracles“ indeed, and with this term we suggest that events could have been worse. In Dryden’s view, God saved Europe from destruction. In our context, God performed miracles in Europe, liberating us from the grasp of Communist ideology and oppression. After these political changes in our part of the European continent and the elimination of fear of public expression of religious beliefs, the space opened for legal interfaith work and mutually beneficial co-operation. 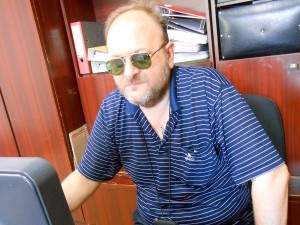 What positive and negative trends  do you see in today’s Europe and how can people of faith help to reinforce the former and mitigate the latter?

Today all religious practitioners are facing secularization and anti-clerical ideologies. They are obliged to stand all together again in defense of the place of religious ethics and moral standards within the framework of Euro-Atlantic values of a United Europe. Today’s togetherness of all religions, at least on a grassroots level, is one of the positive trends.

The most negative trend in today’s Europe is the rise of nationalism and other “-isms”. Nationalism teaches you to be proud of things that you have not achieved, to hate people who you do not know.

How has the migration crisis affected the political, social and interreligious dynamics in Bulgaria and South East Europe? What should be done by civic and religious groups?

The migration crisis affects Bulgaria like the rest of Europe. But it is poverty, an everyday challenge for Bulgarians, which discourages many refugees from seeking shelter in Europe’s poorest nation. “Poverty is a weapon of mass destruction: we need war on it”, said Reverend Jesse Jackson, an iconic American civil rights activist in 2014. Nowadays, much like the US, we are freer — but less equal. The civic and and religious groups are obliged to influence the political milieu and decision-makers in our respective countries to implement the right instruments and standards for the most humane solutions possible regarding resettlement, socialization and integration of refugees in Europe.

What is to be expected of the Holy Synod of the Orthodox Church in Crete? Would it have effect on developments in Bulgaria?

The Russian Orthodox Church is using the stance of the Bulgarian Church as an excuse for not participating in the Synod. The Russian Church will not participate in the Council due to the „non-participation of some of the local Orthodox Churches“ and the „breach of the principle of consensus“ adopted by the Rules of the Assembly. According to the media, three days before the Bulgarian decision, Russian Patriarch Kiril sent nearly an ultimatum to Patriarch Bartholomew, stating that in case of non-compliance, the Russian Church will not attend the council. Indeed, the letter of the Bulgarian Synod copies parts 4, 5 and 6 of Kiril’s letter.

This is the second time the Bulgarian Orthodox Church (BOC) is „taking a position“ on the demands of the Russian Church. In January the BOC surprised the world just ten days before the meeting of the primates of the Orthodox sister-churches by conditioning its participation on the settlement of the status of the Czech-Slovak Metropolitan, His Eminence Rostislav. Rostislav had been elected and recognized as Metropolitan by the Moscow Patriarchate, but not by the Ecumenical Patriarchate and other local Orthodox churches. As a result of this Bulgarian ultimatum, which threatened to jeopardize the meeting of the primates, the Ecumenical Patriarch Bartholomew acknowledged Rostislav as the Czech-Slovak Metropolitan.

Now the Bulgarian Church is doing the same thing, presenting Russian claims as its own, which reinforces suspicions about its autonomy in making such important decisions on the life of the church. Orthodoxy is not in danger. We are in danger of finding ourselves outside of Orthodoxy!

How are interfaith efforts regarded by the dominant church in your country today? Do you find resonance with the minority churches, religions, spiritual groups?

Today, there are opinions that the problem with the pan-Orthodox Council is due to the fact that now the situation is different than before, when the Ecumenical Councils were controlled by the emperors. Expectations and hopes that the Church and the State still cooperate closely are still present in Orthodoxy. The Catholics and the Protestants have already realized their separation from the State. Many churches will have to realize it for themselves. There is some internal resentment to this dynamic in many Churches due to the fact that they are not accustomed to make decisions on their own. They are closely connected with the state and the church leadership remains too far from the people.

What makes the approach to interfaith dialogue by the United Religions Initiative special?

URI is a global grassroots interfaith network that cultivates peace and justice by engaging people to bridge religious and cultural differences and work together for the good of their communities and the world. URI provides, first, inter-cultural, inter-ethnic, inter-religious and interfaith dialogue, and second, a bridge-building role between secular society and spirituality and religions.

URI-Europe invites like-minded people into a conversation about how to extend and define where the cooperation between Cooperation Circles and partners can be a real win-win. It offers a possibility to create deep, mutually-enriching, content-based cooperation. 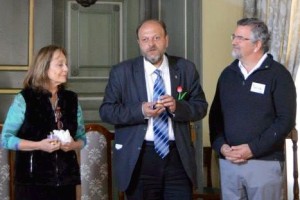 What examples can you give of the most practical ways that your efforts have made a difference in people’s lives?

URI Europe is interconnected in an international context: 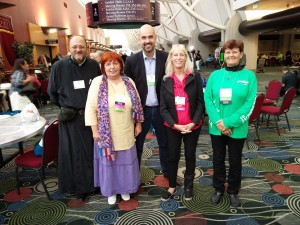 What were your impressions from the 2015 Parliament of the World’s Religions in Salt Lake City?

The Parliament of the World’s Religions is a historic event where we can meet and interact with people from many different religions and learn from them. It was a great opportunity to meet attendees from all over the world, learn about them and make them aware of our own religion and community, with face-to-face communication at various sessions, through presentations, at exhibit booths, at lunch served by the Sikh community, at Mormon concerts. We shared a feeling of brotherhood with attendees of all faiths.

How could this global forum best reflect realities in Central and Eastern Europe when it comes to Bratislava? If there was one feature that would make a Bratislava Forum unforgettable, what would it be?

It would be such a great joy to have so many participants and visitors from all European countries, from the four corners of the European continent, and above all, from the former Soviet bloc sister-countries – where for several decades we were forced mostly into dialogue with state ideologies, not with religions!